Introduction to the Ethics of Clothing and Clothing Production

Recent catastrophes in sweatshop factories have brought the world’s attention to the ethical issues surrounding clothing and clothing production. Much attention has been paid to the tremendous losses that these events have caused both in terms of human lives and property, and the initial focus has rightfully been on the prevention of further catastrophes. Many new guidelines have been established for governments, trade agreements, individual contracts with companies, and for the factories. In the wake of these events, it is now time to take a step back from the initial reaction to look at the issues involved in a more critical and analytical way.

The purpose of this special issue journal is to bring together current thinking about the ethics of clothing and clothing production. This interdisciplinary team of researchers each designed a study based on their interests related to this important issue. What is presented in this special topics issue of the Siegel Institute Ethics Research Scholar’s (SIERS) Journal is the collection of those research papers. This represents the first convening of a group of SIERS scholars for the purpose of studying a particular ethical issue of current concern. This group of researchers met weekly in the spring of 2016 to discuss their projects and support one another’s research. The following two semesters, they worked independently to carry out the research and analyze the results. They stayed in contact electronically and only met as necessary.

The first set of three articles focuses on the clothing industry as a whole, from the impact of global attention to sweatshops and sweatshop disasters to the effect of trade agreements on the industry.

While other valuable research has looked at various aspects of clothing issues, the topic hasn’t been examined from a purposefully multidisciplinary or interdisciplinary approach. Instead of looking at the issue through one lens, such as work environment, law, or policy formation, this journal issue is focused on placing the issue at the center of the discussion and looking at it through several different lens. The researchers involved came from six different disciplines, and the value of these interactions will be clear to the reader.

Serena Newhall, in her paper entitled Ethical Reform in Bangladesh’s Ready Made Garment Industry: Building on the Alliance and the Accord, covers the progress made with safety concerns after the factory disasters. She covers the impact of the Accord on Fire and Building Safety in Bangladesh and the Alliance for Bangladesh Worker Safety. The Accord, for example, was signed by over two hundred apparel brands and worker unions. This represents great progress toward minimizing risks for workers, strengthening regulations, creating fair labor practices, and reviewing wage structures. Progress on these issues in leading clothing production countries like Bangladesh and China, paves the way for other countries to follow suit. The Alliance and the Accord also serve as a way to maintain global attention to these concerns. Newhall, a Master’s in Business Administration student, concludes her research with a set of recommendations for the clothing industries encompassing labor, wage, and worker concerns.

Alicia Whittle Rooks, a graduate student in Integrated Global Communications, explored the role of government in dealing with sweatshops within their countries in her paper entitled The Government’s Influence on Sweatshops in Developing Countries. For this research, Rooks interviewed people who worked with or in sweatshops. She used Framing Theory to explore the effects of globalization and foreign investment on this industry and its workers as well as the moral and ethical implications of allowing sweatshops to manufacture clothing for the world. Her findings emphasize the need for stronger regulations, switching to the piece-rate system of pay, anti-corruption measures, worker rights education, and more research on the relationship of the Gross Domestic Product on domestic income scales.

Zachary Harris, an undergraduate student in Political Science and International Affairs, wrote a paper on the history of trade agreements entitled Historical Analysis: Textile and Apparel Trade. For his analysis, he researched archival data related to the international trade agreements affecting clothing and clothing production from the 1970s until the present time. Within this snapshot time view, Harris discusses the circumstances that led to the trade agreements and the enactment of international trade policies in the wake of the agreements. He reviews the systems of quotas established in the agreements, the effect on import and export countries, textile market share, trade and employment protection mechanisms, efforts to reduce production costs, the differentiated effect on certain developing countries, and the future of the textile industry. He concludes with recommendations for the future of the clothing industry.

The second set of two articles focuses on actual clothing rather than the industry: how we make clothing choices and clothing for specific markets.

Kesha Lewis, a Psychology undergraduate, conducted research on The Influence of Emotions on Our Shopping Habits. Lewis examined the common coping mechanism referred to as “retail therapy” and reviewed previous research on retail therapy and its function as a potential stress reliever and comforting activity. She also looked at the impact of planned vs. unplanned shopping. She compared whether men and women shopped more often while exhibiting a negative or positive emotion. Lewis’ findings were surprising and, in some cases, both contrary to previous research and popular stereotypes about shopping.

Crystal Money, a Master’s in American Studies graduate and adjunct faculty member, wrote the paper entitled: Do the Clothes Make the (Fat) Woman: The Good and Bad of the Plus-Sized Clothing Industry. In this research, Money explores the plus-size fashion industry, its intended audience, and whether or not the audience is truly being served. She uses a mixed methods research approach: interviews with self-identified plus-sized women, an ethnographic approach to shopping options in Atlanta, and an analysis of current literature on the issue. This mixed methods approach gives a very insightful and thorough look at the realities of the clothing options for plus-sized women. Money also offers commentary on the attempts made by various companies, such as Lane Bryant and Dove, to advertise to and attract this specific audience.

This collection of papers represents a first look at the complex issue of what makes ethical clothing. The strength of this collection is in the multidisciplinary and interdisciplinary approach to the work. No one approach is reviewed in depth, but the topic is rather introduced as many distinct and separate lens through which to view the myriad of issues that the subject of what constitutes ethical clothing brings up. Much more research still needs to be done. Each one of these studies could be expanded upon. Many other disciplines could add perspective to this topic. This volume is not meant to be exhaustive of the topic, but rather serves as a benchmark to the work that has been accomplished and still needs to be done.

This dodecahedron approach to examining an ethical issue facing many researchers is the focus of each volume of the Siegel Institute Ethics Research Scholars Journal. The aim is to include as many perspectives as possible around one topic, and all research will be done through an applied ethics lens.

Introduction to the Ethics of Clothing and Clothing Production
Linda M. Johnston

Ethical Reform in Bangladesh’s Ready Made Garment Industry: Building on the Alliance and the Accord
Serena Newhall

The Influence of Emotions on Our Shopping Habits
Kesha Lewis

Do the Clothes Make the (Fat) Woman: The Good and Bad of the Plus-Sized Clothing Industry
Crystal N. Money 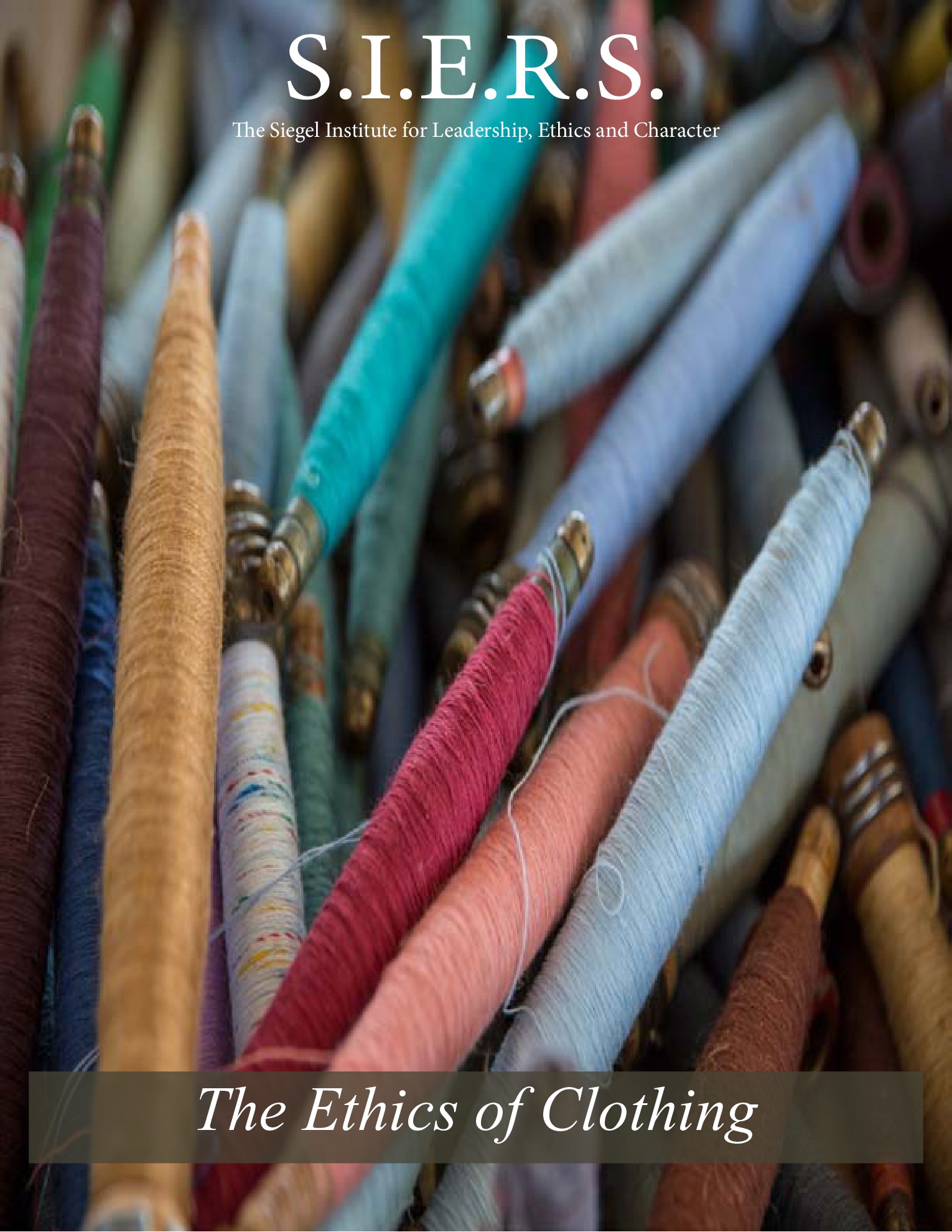