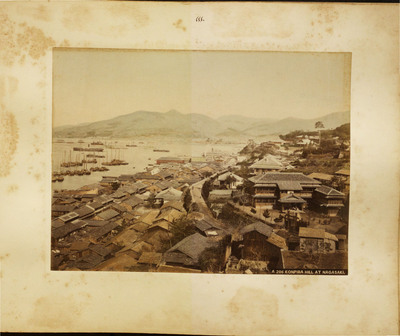 A206 Konpira Hill at Nagasaki. [This is a photo from the album presented to the Kawamura family by Mr. and Mrs. Jordan, with the caption "A206 Konpira Hill at Nagasaki." It is a view of the southern tip of the foreign settlement and Naminohira from the Kotohira Shrine in Minamiyamate. The large building in the foreground to the right is the Chintei Elementary School (later Naminohira Elementary School) moved here in 1887. Visible above it are the Western-style houses at No.25 Minamiyamate, which started construction in 1889, and, next to it, No.24. A person, apparently a teacher, stands at the entrance to the elementary school, and boys and girls are playing in the school ground. Right below the great pine tree (a curving pine tree toppled by a typhoon in 1901) on the hill to the right is the Glover residence. Below that is the Ringer residence, and the flagpole below that is a Russian residence (the consulate was moved from here to No.17 Minamiyamate in 1885). The Russian Navy Hospital is visible at the bottom of the stone embankment. Japanese ships are being built on the shore in the foreground. The buildings in the centre of the photo are dockyards. Dejima is visible in the background. The protruding land to the right is Umegasaki. The photo seems to be dated between 1892 and 1897. - http://sepia.lb.nagasaki-u.ac.jp/zoom/en/record.php?id=3817]