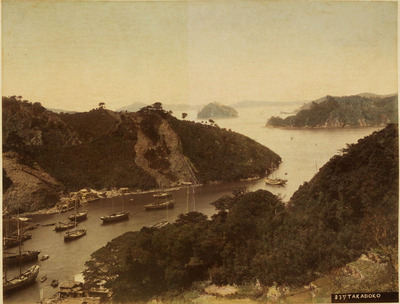 837 Takaboko. [This is a photo from the large lacquer-coated album of Kusakabe Kinpei and Ogawa Kazuma, with the caption,"201Takaboko." This is Ogawa's classification number. The photo was taken between 1892 and 1897. It is a view of Takahoko Island at the mouth of Nagasaki Harbour from the hillside of Tomachi. The cape beyond is Kozaki and the tip is Kozakibana, with Kaminoshima overlapping in the background. The area in the foreground is Megami, the narrowest channel on the approach to Nagasaki. In the Edo period, there were guard stations on the two banks, Tomachi and Nishidomari, and the Bizen Clan and Fukuoka Clan took turns every year to keep watch over the entrance to the harbour. There are many photos taken from this angle, but this photo provides a particularly clear view of the houses, cemetery, and sailing vessels in the harbour. Coal is stacked up in a stockyard on the opposite bank. The ship, an "isaba-sen" or fishing boat, seems to specialize in transporting coal from Takashima Island lying behind Takahoko Island in outer Nagasaki Harbour. The coal stocked here was probably supplied to ships visiting Nagasaki. See: http://sepia.lb.nagasaki-u.ac.jp/zoom/en/record.php?id=2129]