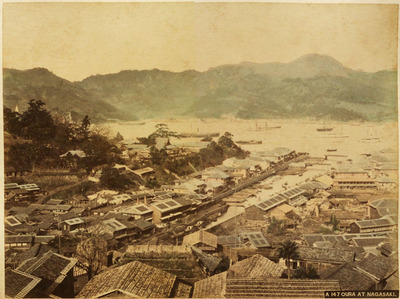 The site of the Nagasaki foreign settlement at the mouth of the Oura River in 1859, before the reclamation of flat land from the harbor and the development of the hillsides into residential districts. Myogyoji, the Buddhist temple where the first British consulate in Japan was established the same year, is visible center-left. In 1863, British merchant Thomas Glover would build his famous house beside the lone pine on the Minamiyamate hillside. http://www.nfs.nias.ac.jp/page005.html]