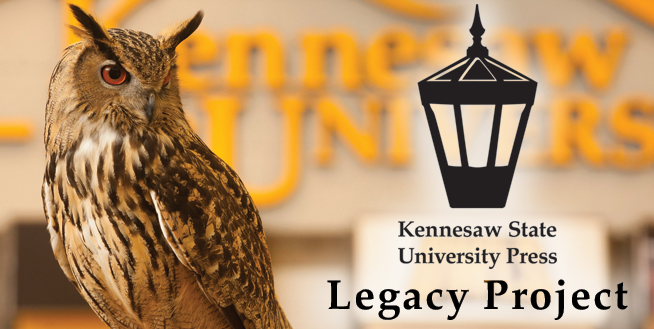 The Kennesaw State University Press, established in 2004, supported Kennesaw State University’s position as a premier learning-centered comprehensive university. The Press was dedicated to the advancement and dissemination of knowledge to scholars, students, and general readers through books, journals, and electronic media. Working with both academic and nonacademic authors, the Press published high-quality manuscripts — both fiction and nonfiction — covering a broad array of disciplines and topics. The KSU Press emphasized works of scholarly and popular interest concerning Georgia and the surrounding Region including, but not limited to, its art, culture, stories, history, and people. The KSU Press was especially interested in providing publication assistance to regional authors.

Many of the Press's publications have won literary awards including the Georgia Author of the Year Award, the Lillian Smith Award, Atlanta Magazine’s Critics Choice Award, Georgia’s Top 25 Reading List, The Georgia Center for the Book’s All Georgia Reads. Among our authors are a former Georgia Poet Laureate, finalist for ForeWord Magazine’s Book of the Year Award, and finalist for the National Book Award.

The KSU Press Legacy Project aims to keep alive the manuscripts published during the Press's existence. The work published is an incredibly important piece of Kennesaw State University's historical record and we at the Digital Commons feel we should keep it in the picture, even if only as a remembrance.

Printing is not supported at the primary Gallery Thumbnail page. Please first navigate to a specific Image before printing.